Through the Bessie’s Hope Dreams Can Still Come True program, 103 year old, World War II-decorated Army nurse, May Alm, recently fulfilled a goal to ski the Colorado slopes! This magnificent woman served under General Patton, was in the Battle of Normandy and other historically renowned battles, received several battle medals, and is still quite the adventurer.

Bessie’s Hope employed the services of the National Sports Center for the Disabled at Winter Park Resort, so that May and her daughter, Marie, could ski together again. When May first saw the chair ski and asked what it was, she was told that she would be skiing in it. To that, Feisty May said, “That’s weird.”

She enjoyed every second of it and laughed her way down the mountain.
https://assets.alterramtnco.com/c/3vestnzg 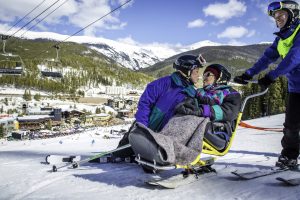