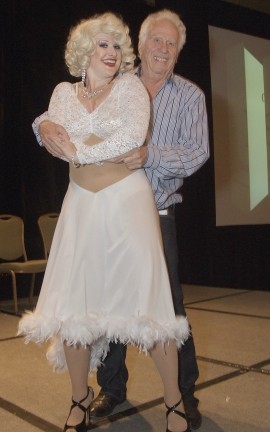 Some of the biggest names in showbiz — Frank Sinatra, Marilyn Monroe, Dean Martin — shared the spotlight at Copacabana Night …

Wait? What’s that you say? They’ve gone on to that big stage in the sky?

True, but entertainers who look and sound a lot like them are and THEY put on quite a show for 450 friends of Bessie’s Hope. The event chaired by LaFawn Biddle and Sandra Arkin also featured “fabulous fakes” who presented the songs and comedy of Neil Diamond, Jerry Lewis and the Andrews Sisters.

Copacabana Night began with a silent auction held in the Marriott Denver Tech Center’s atrium lobby, where folks like former Colorado first lady Frances Owensand her daughter, Monica, checked out table after table filled with items ranging from dance lessons at the Arthur Murray Studio in Lakewood to sessions at Corepower Yoga. Frances Owens and Kay Ray had chaired the event’s decor committee. 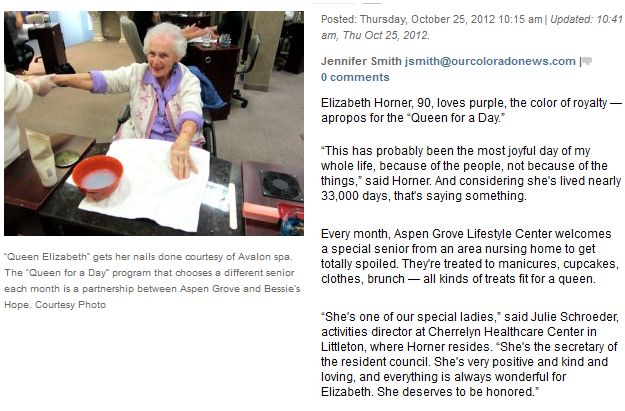 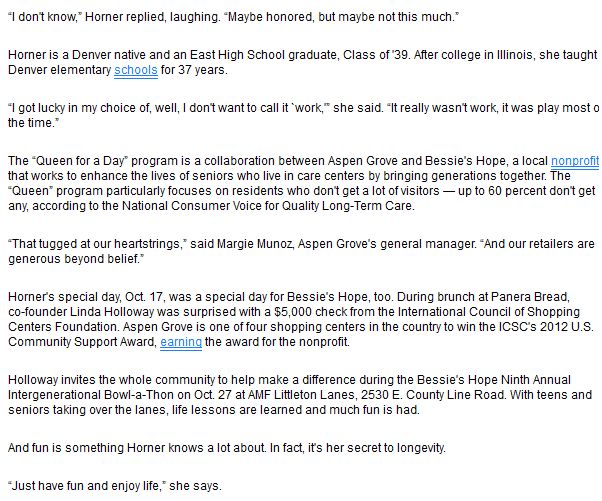 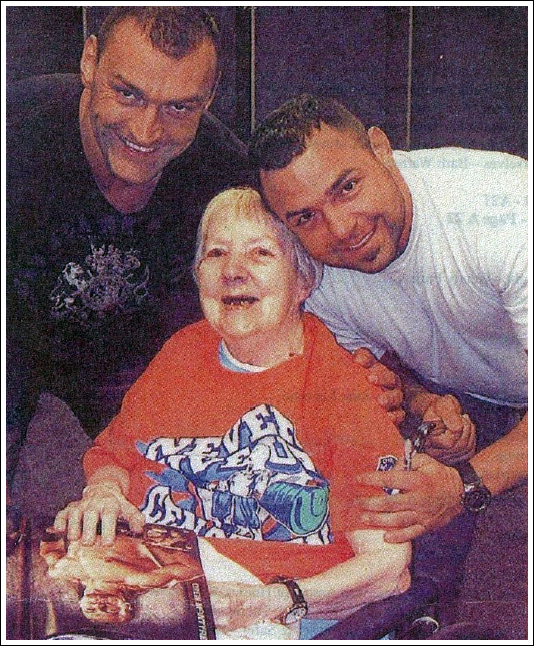 Virginia Hewett has resided at Clear Creek Care Center of Westminster for four years. She is known for her great personality, excellent knitting skills and her love of World Wrestling Entertainment (WWE). “We know not to bug Virginia when she is watching WWE. She is a big fan!” says Erin Jones, Director of Resident Services.

When the WWE planned an event in Denver, Colorado, Erin enlisted the help of Bessie’s Hope (a non-profit organization that helps enhance the quality of life of individuals residing in nursing homes and assisted living communities) fulfill a wish for Virginia to see her favorite wrestlers in-person. Virginia has not always been a wrestling fan. “My son bought me a beautiful television set and one night as I was changing the channel and WWE was on. It was the silliest thing I had ever seen, but it was different than anything else. It’s really quite entertaining!”

Virginia’s statement supports what the WWE touts every week they are the “leader in global entertainment.” The WWE is currently the largest professional wrestling company in the world. The shows are broadcasted to an estimated 14.4 million viewers in the US alone and are televised in 30 languages to more than 145 countries. Certainly Virginia is living proof that they attract a very diverse “You know it’s not ‘real’,” explained Virginia, “if you look closely, you can see that they are not actually hitting the opposing wrestler. Still, they do get hurt at times. They possess great talent in their acting and wrestling abilities they practice three weeks out of the month and perform the other week.” Virginia knows a lot about wrestling seeing the WWE live was a dream-come-true. On October 16, Virginia could barely contain her excitement as she entered the Pepsi Center to watch the show. It was three hours of absolute bliss” exclaimed Virginia. Her eyes lit up with renewed excitement as she described the sounds of the crowd cheering and booing at the wrestlers she saw up-close from her box seat.

The best part of Virginia’s night was when she was escorted back stage to meet “They were sitting at a table signing autographs they look so different out of costume and in street clothes. I hardly recognized some of them. Vladimir Kozlov looks so mean in the ring, but he is really such a nice man.” Virginia explained. But her biggest thrill of the night was meeting WWE’s infamous bad-guy ‘Edge.’ Virginia stated, “Nobody expected him to come back stage and talk to us- he was absolute doll! He spent so much time talking with me and even offered to sign a ‘photograph, I said, ‘not without a hug and letting me feel those whiskers on my cheek’ and he did! You just take to him right away he’s just wonderful!” What is next for Virginia Hewett? She plans to continue to watch WWE and her new favorite wrestler, Edge. 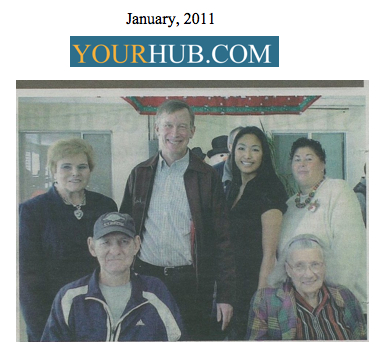 On Feb. 2, LaFawn Biddle hosted a Kick-off party for the 8th annual Intergenerational Idols event to support the work of Bessie ‘s Hope at the Cherry Hills Country Club. Mike Rosen, KOA talk show host, is the honorary chair and the emcee for the 20II Intergenerational Idols. He explained to the kick-off attendees that Bessie’s Hope is the only organization in the country providing the services it brings to the elders of nursing homes and assisted living facilities . It doesn’t stop there. Participation in Bessie’s Hope transforms the lives of many “at-risk” youth, many of whom are in residential treatment centers. Youth and elders both feel valued and needed, while cultivating long-term relationships. Families and adult groups from businesses and organizations find the most heartwarming, enriching volunteer experiences through Bessie’ s Hope.

The Intergenerational Idols event will be held on Saturday April 9, at the Marriott DTC and will feature talented youth, elders and some performers in between. Elvis is even going to appear! For more information, go to www.bessieshope.org or call 303-830-9037. 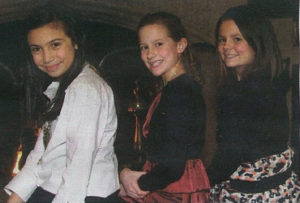 Gabrielle Diecidue, Sarah Cowden and Christine Felling told the audience how special the experience was to visit the nursing home elders 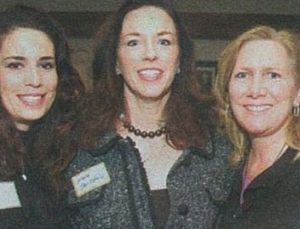 Rosalina Diecidue (left) is the Entertainment Chairperson for the Idols event, and Cathy Felling (right) is the Silent Auction Chairperson. Mary Stockdale (center) was a guest at the kick-off. 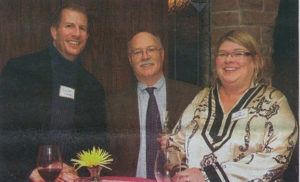 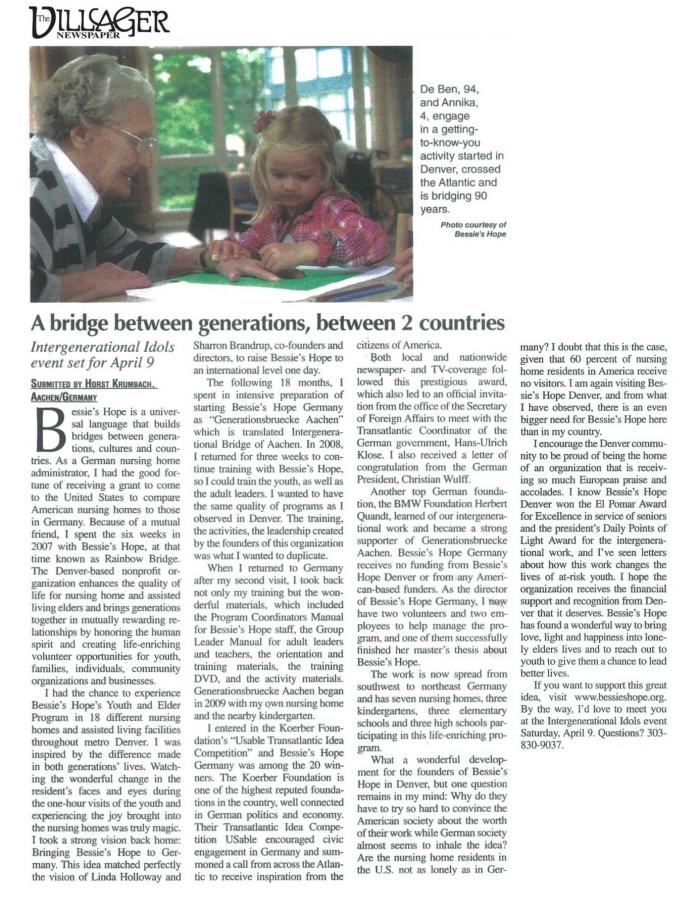 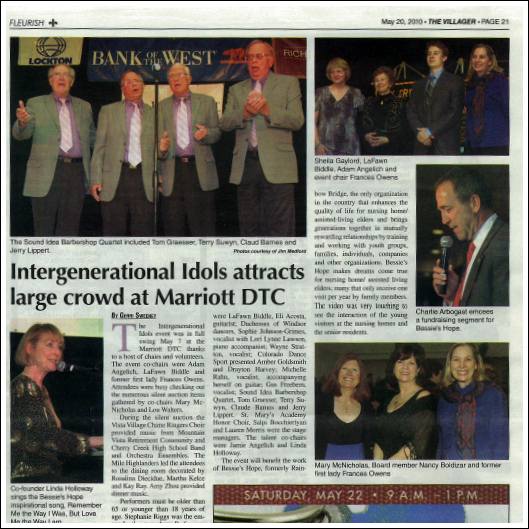 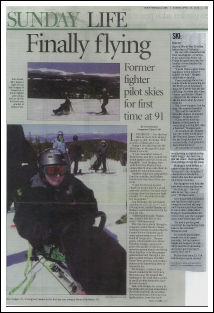